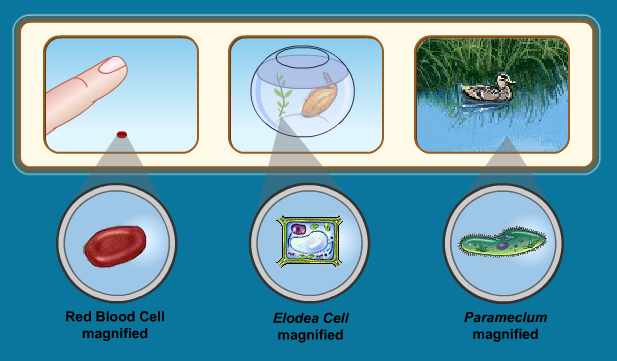 This GIF shows what would happen when a red blood cell is placed in a Hypotonic, Isotonic, and Hypertonic solution.

"hy-PO is LOW! Oh no! I'm gonna BLOW!"
A hypotonic solution is one that has a relatively low concentration of solutes (like salt) dissolved in it, compared to the inside of the cell. The dissolved solids cannot move across the semipermeable membrane of the cell, whereas the water molecules (pictured in the GIF) can. Recall that diffusion describes the movement of matter (including water) from areas of relatively HIGH concentration to areas of LOW concentration -- always HIGH to LOW. If the amount of salt/solute in a hyPOtonic solution is LOW, that means the proportion of water/solvent must be HIGH. In the GIF we see water molecules diffusing from an area of comparatively HIGH concentration (outside the red blood cell) to an area of relatively LOW solute concentration (inside the red blood cell) in a process known as osmosis, a special type of passive transport. Because water is moving into the red blood cell, "trying" to dilute the concentration of solutes inside and bring the two solutions into equilibrium, the cell swells and could potentially burst ("lyse").

"ISO-tonic is NICE-o-tonic."
The prefix "iso-" means equal or the same. In an isotonic solution, the concentration of solutes both inside and outside the cell is the same. Water continues to move passively via osmosis, diffusing both into and out of the cell. However, the rate or amount of water moving into the cell is the same as the rate or amount moving out of the cell, resulting in zero net movement. In other words, the cell is neither "losing" water nor "gaining" more, overall. It will neither swell nor shrivel, but will instead remain the same (maintain the same turgidity).

"HYper is HIGH! Water goes BYE!
Leaves me HIGH and DRY! I might DIE!"
A hypertonic solution has a high concentration of solutes (like salt) compared to solvent (water). There is a larger proportion of water contained inside the cell, meaning it will diffuse from HIGH concentration to LOW, from inside the cell to out, "trying" to dilute the extra-salty water in the cup/container/beaker. As a result, the cell will lose turgidity, shrivel up or "deflate," and might die.